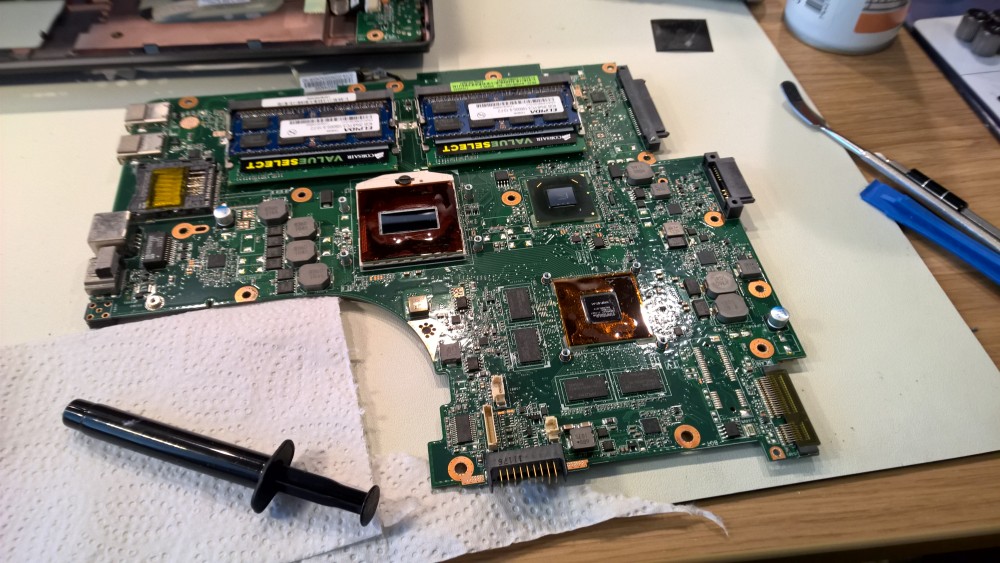 After getting a taste for liquid metal, not literally, during my delidding project I was thinking, isn’t there anything else that could benefit from liquid metal? I happen to own an older laptop that I don’t really use anymore so I thought why not, lets liquid metal it!

The laptop in question is a Asus N53SN. The hardware inside it is still pretty nice, it was the top of the line model so it has a Intel Core i7 2630QM and a discrete Geforce GTX 550M graphics card. I also upgraded the RAM a few years ago from 8 to 16 GB and I put in a 256 GB Samsung 850 Pro SSD. That is to say that I have something to lose, I would still like to be able to use the laptop when I’m done with it. But I guess that makes it a bit more interesting!

First step is to do some benchmarks so I can get a baseline for what the temperature is during load before liquid metal.

This first graph shows the CPU temperature under max load. 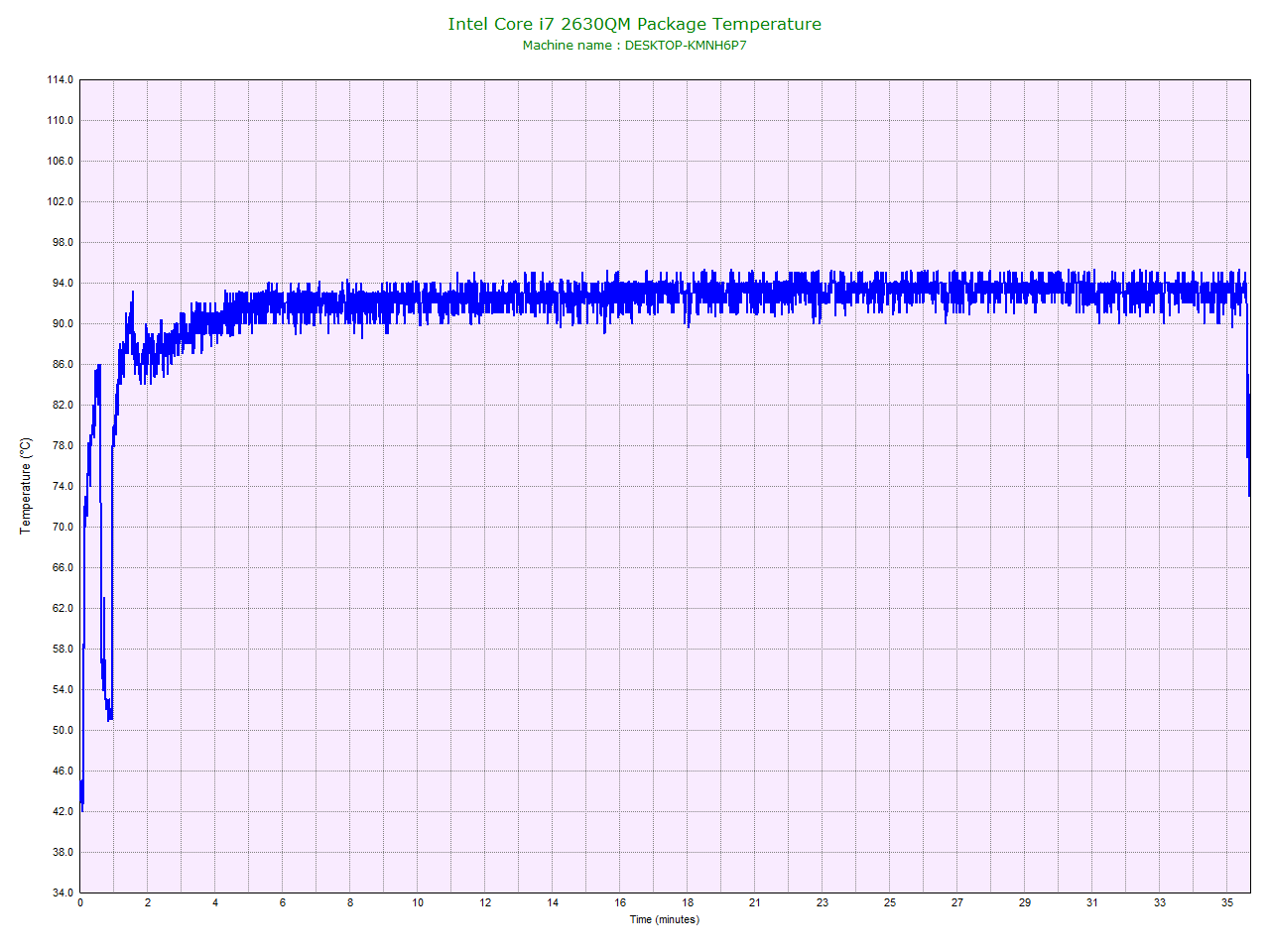 This graph shows the GPU temperature under max load. 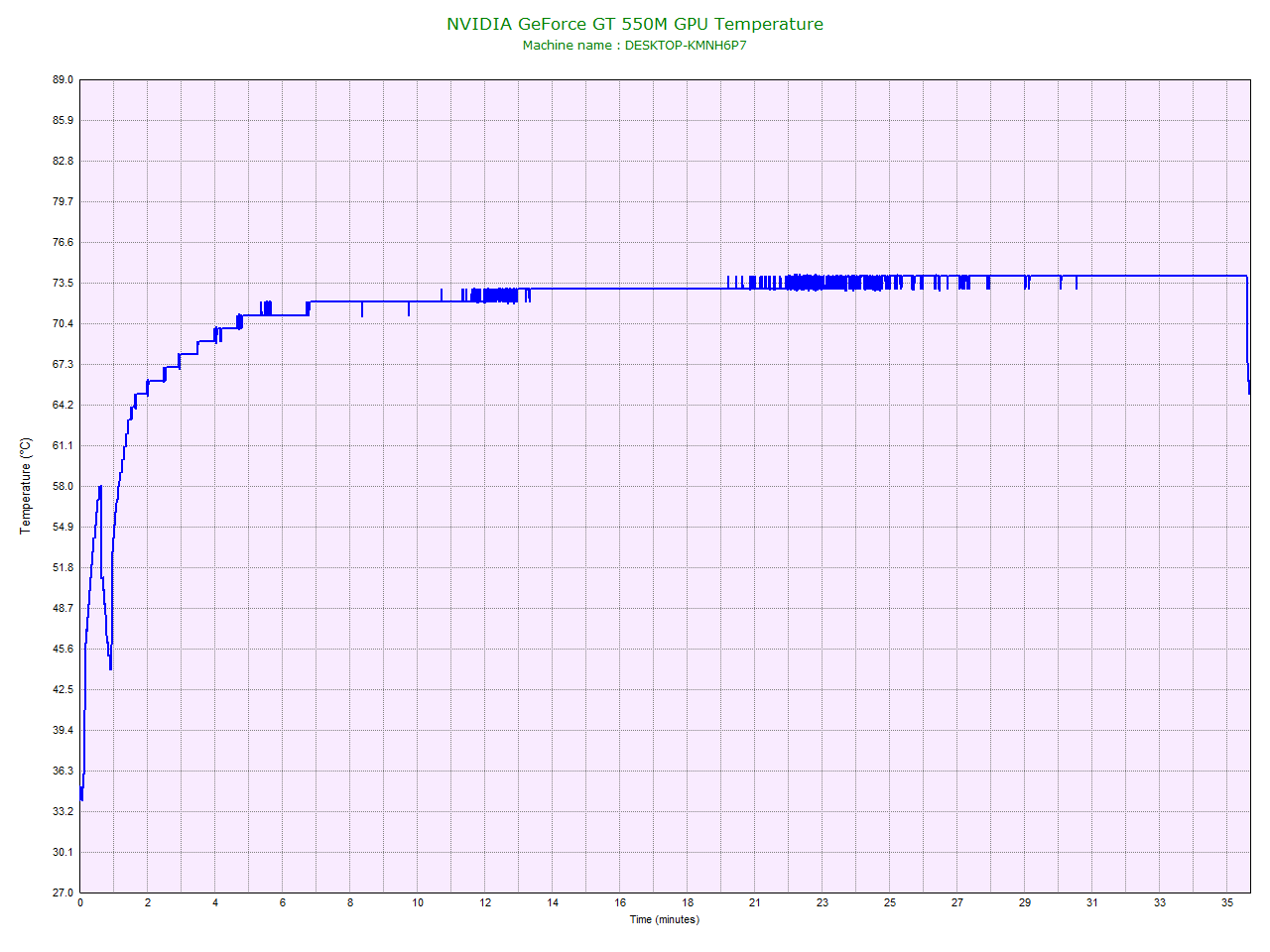 Now it’s time to turn off the computer, take out the battery and start to take it apart! This was actually the hardest part of the entire project. It’s always hard to know if I found all the screws, how hard can I bend something before it breaks and so on. If you are going to do something like this I would recommend a magnetic mat where you can organize your screws. Also take pictures if you are unsure if you will remember how to put it back together. I was bad at taking pictures during this project but that doesn’t mean you should be too!

This laptop was kind of annoying in the sense that you get to the innards from the top. You take out the keyboard and start work your way down. I was hoping to find the heat sink directly under the keyboard but instead I found the bottom of the motherboard. Which means that the CPU is pointed towards the ground.

So I had to unscrew the entire motherboard from the chassis and take it out and flip it around to get to the CPU. After that it was just a few screws to loosen the heat sink. After some cleaning of the CPU and GPU die I got this.

This is the heat sink. 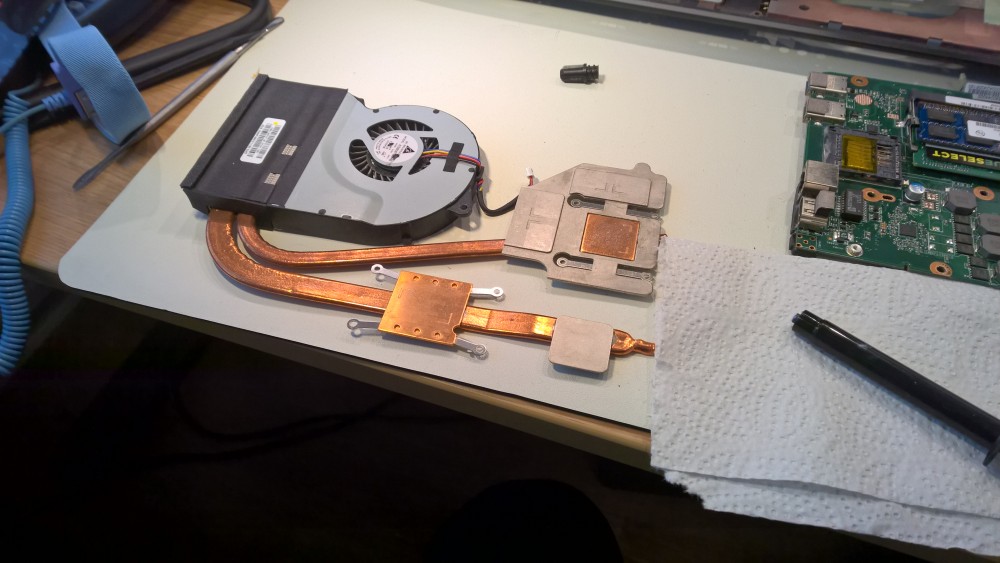 As you can see there are 3 major components being cooled. The CPU, top left in the first image, the GPU (bottom right) and the chipset (top right). The heat sink also makes contact with what I would guess is the VRM:s for the GPU, there are four of them alongside the GPU.

I of course wanted to cool as much as possible with liquid metal but you can only use it on copper heat sinks. It’s pretty clear that the CPU and GPU have copper heat sinks but I’m not so sure about the GPU VRM:s. It’s also easy to spill liquid metal on the motherboard if I put it on the VRM:s so instead I decided to use normal thermal paste (Kryonaut) on the VRM:s and liquid metal (Conductonaut) on the CPU and GPU. I’m sure the new thermal paste is way better than the stock one so I should still get a performance boost from the new paste.

Unfortunately I don’t have a picture of the liquid metal applied but the process is pretty much the same as when I delided my 6700K.

When the liquid metal and thermal paste have been applied I just screwed the heat sink back on and from that point on it should be pretty stable. It shouldn’t matter that much how you handle it.

When I had put the computer back together I fired it up and ran the same tests as before to see if I got any performance improvements.

CPU temperature under max load with liquid metal shows a drop in temperature of about 4-6 degrees. 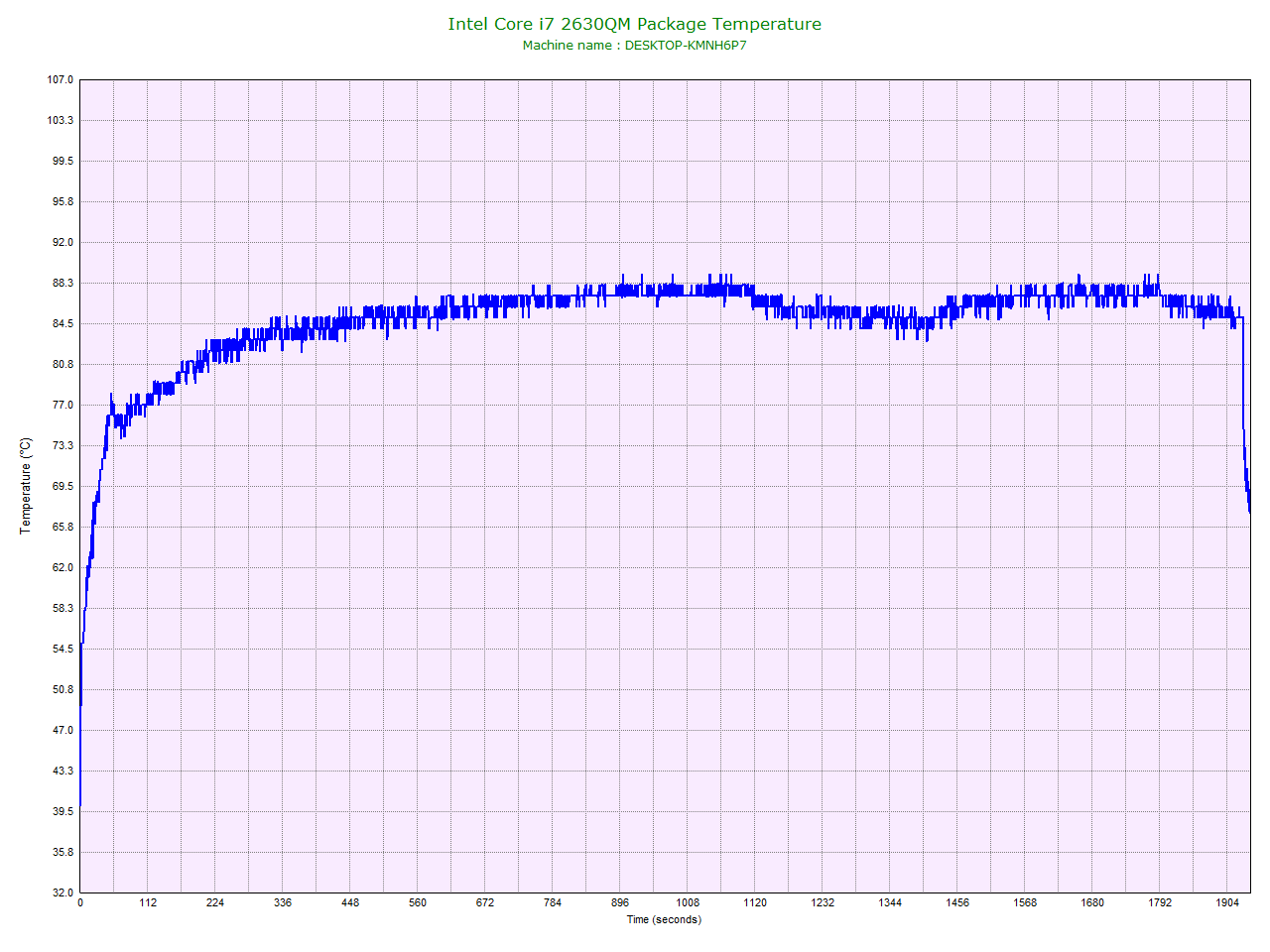 The GPU test shows a not very big difference at all unfortunately. It takes a bit longer for it to get up to the max temperature and the max is a bit lower. 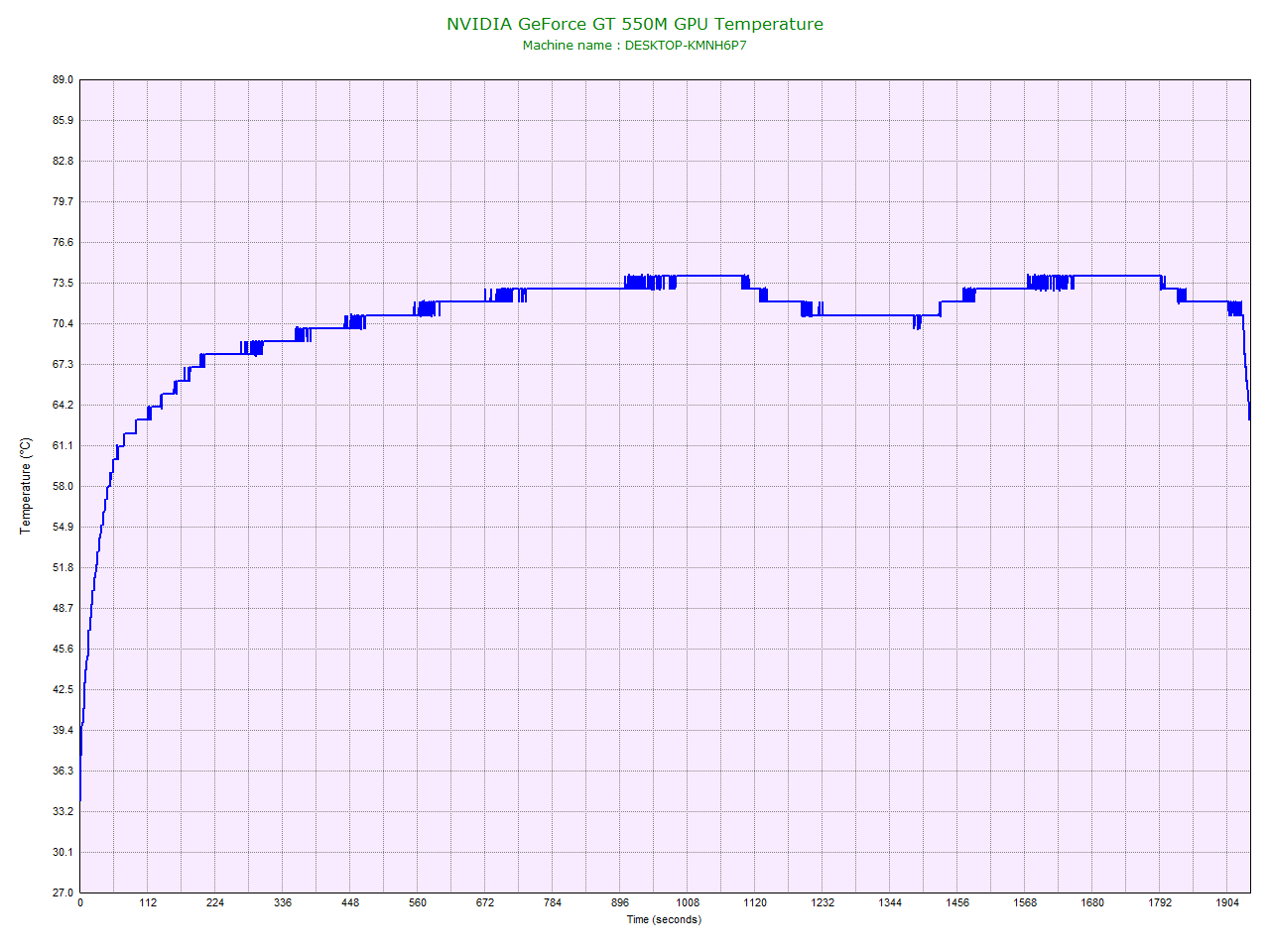 So was it worth it? I would say that if you are just after lower temperatures then no it was not worth it. If you want to have some fun and learn, and you can afford to lose the laptop, then I would say it’s a project worth doing. This laptop also already have a pretty good cooling system so the possible gains aren’t that big. I know that there are laptops out there that would show a much bigger improvement than what I got.